The information and photos on this page, and those it links to, are contemporary accounts of the project to develop  and construct the tearoom and shop, and reflect what was known at the time, and should be viewed in that context.

Unfortunately, the opening of the renovated hall, new tearoom and shop does not appear to have been documented, and no contemporary reports have been found.

Following the momentous announcement of the grant funding award for the St. Ninian’s Hall Development project by the Big Lottery in April, Isle Futures and Smith Design Associates in Dumfries, the architects appointed to manage the project build have been meeting regularly during the summer.  Invitations to tender were issued to six contractors with all responding by the requisite time in late July.

A Project Management Group, chaired by Craig Ronnie and representatives from Isle Futures and the Isle community has been closely involved with a wide range of design issues that arise with such a project. To date these have included agreeing the environmental standards for the build, reviewing visitor &  reception requirements and  the communications infrastructure, agreeing the  kitchen layout and fitment requirements, being involved in the tender pr 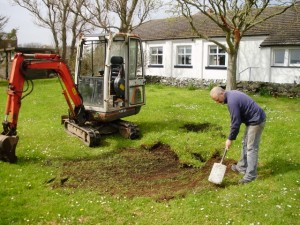 ocess for the build and timeline. Members of the Hall Management Committee have also contributed during this stage of the project.

It was hoped that the successful contractor would have been appointed in August to allow construction to commence in September. However further work on the tender costs submitted is required before approval is received from Big Lottery. It is anticipated that construction will start in December. Although this will mean completion is likely to be next summer, the community is assured that the final result will be one that we can be proud of.

During the period of construction, the existing Hall building will require to be closed to allow some work to be undertaken. Further information about the period of closure will be advised when the detail of the construction project has been agreed.

Project Management Group is set up and invitations to tender issued.

3B Construction Limited are appointed as the successful bidder for the build contract for St Ninian’s Hall Annexe.

Sixteen weeks in and the roof is on!